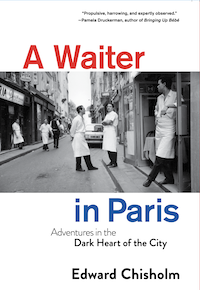 A Dickensian tale of a young man’s trial by fire in a French bistro gives rise to biting commentary on Parisian culture in Chisholm’s intoxicating debut. … Throughout, Chisholm renders the City of Light in vivid scenes of squalor and splendor, its romance and wretchedness mirroring that of the “great piece of theater” he starred in before eventually leaving the restaurant himself. Bittersweet and enchanting, this serves as a potent look at the gritty underbelly of a glittering world. (Sept.)

The full review may be read on the PW site here.

A Waiter in Paris: Adventures in the Dark Heart of the City by Edward Chisholm will be published  in North America on August 9, 2022 by Pegasus Books, and in the United Kingdom by Monoray on May 5, 2022, and is represented by William Clark in association with Gordon Wise at Curtis Brown.

Edward Chisholm is an English writer currently based in Lausanne, Switzerland, where he is working on his next book and other projects for the small and large screen. In 2010 he graduated from the School of Oriental and African Studies, London. Soon after he moved to Paris. His written work has appeared in The New York Times, the Guardian, Telegraph Weekend Magazine, Wall Street Journal and Financial Times magazine.