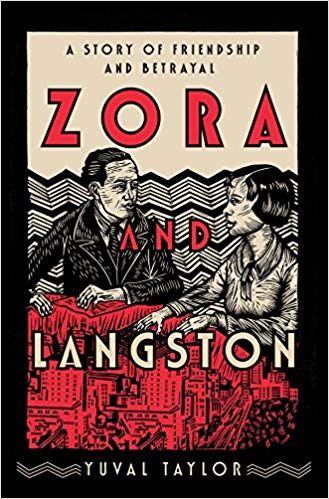 Kirkus Reviews ZORA AND LANGSTON: A Story of Friendship and Betrayal by Yuval Taylor

The tale of a famous literary friendship that ended in bitterness.Zora Neale Hurston (1891-1960) and Langston Hughes (1901-1967) were major figures of the Harlem Renaissance and, for several years, collaborators and loving friends. Taylor (co-author: DARKEST AMERICA: Black Minstrelsy from Slavery to Hip-Hop, 2012, etc.), senior editor at the Chicago Review Press, places their friendship at the center of a revealing examination of the alliances, betrayals, rivalries, and aspirations that characterized the African-American literary and arts world in the 1920s and beyond. In 1926, Hurston bestowed the nickname "Niggerati" on the many young writers and artists, "opposed to the literary conventions of the older generation of the black elite," who gathered in Manhattan for social and literary activities. They were supported—sometimes with publicity, sometimes financially—by admiring white New Yorkers Hurston called "Negrotarians," including Carl Van Vechten, Hart Crane, Muriel Draper, Max Eastman, Eugene O'Neill, George Gershwin, and H.L. Mencken. Foremost among them was Charlotte Mason, an heiress who inherited her husband's vast wealth after his death in 1905. Among her passions were parapsychology, psychic healing, and African-Americans and Indians, who she believed were unsullied by "the ills of civilization" and possessed of "primitive creativity and spirituality [that] would energize and renew America." A major collector of African art, she disdained white culture, declaring herself "eternally black." In 1927, she decided to become a personal patron to many figures of the Niggerati. She must be called Godmother, she insisted, and demanded nothing less than complete filial devotion in exchange for monthly stipends of $150 (for Hughes) and $200 (for Hurston) to allow them to pursue their work. Mason, Taylor writes, was "a jealous god, controlling and wrathful," dictating what kind of projects her "children" pursued and, in Hurston's case, prohibiting her from showing her writing to anyone without Mason's consent. Drawing on published and archival sources, Taylor creates a perceptive portrait of the bizarre patron and of the Hurston-Hughes friendship. A fresh look at two important writers of the 1920s. Reviewed January 1, 2019.

Zora and Langston: A Story of Friendship and Betrayal by Yuval Taylor was published on March 26th by W.W. Norton & Co.

Read what The New York Times had to say about the book last weekend: “That’s What Friends Are For: The Complex Literary Friendship Between Langston Hughes and Zora Neale Hurston” by Zinzi Clemmons.
PrevPrevious
NextNext